Gavan has a long background working in Ireland’s built heritage, first with visitor services in the Office of Public Works and subsequently as part of the team at Saint Patrick’s Cathedral. Administrator since 2010 he is responsible for the financial affairs of Saint Patrick’s to the Board and leads the lay staff. 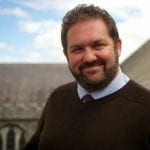 Louis has been involved in Saint Patrick’s for most of his life. Having been a boy chorister here and a pupil of the Cathedral schools he was appointed Dean’s Verger in 1993 while still attending the Cathedral Grammar School, a role he still holds today. Following on a diverse career path in both the public and private sectors, Louis was appointed Assistant Supervisor in Saint Patrick’s in 2000, and Cathedral Manager in 2010. Louis is responsible for the day to day activities in the Cathedral including visitor care, staff supervision, event management and maintenance of the building. 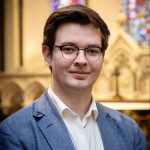 Clark has been a part of the Cathedral community since 2020, as the Vicar of the Prebendary of Monmohenock, singing with the Cathedral Choir for the daily round of choral services. Before moving to Ireland, Clark read Music at the University of York (UK) and graduated with first class honours. Continuing his academic studies, Clark is currently undertaking a doctorate (PhD) in Music and Liturgy at Trinity College Dublin. Most recently, he has held teaching and management roles at boarding schools and student exchange agencies across Ireland. Since 2022, Clark has been the Cathedral’s Education Officer, where he is responsible for development of the various learning programmes, resources, educational visits, volunteers, and tour guides.

Rowena joined the Cathedral staff in 2018 and moved to the office in 2019 where she is responsible for the day to day running of the Cathedral office.

Master of the Music

Stuart studied at the Royal College of Music with John Birch, during which time he was awarded scholarships at the Temple Church, St. Bride’s Church, Fleet Street and St. Paul’s Cathedral; he became an Associate of the Royal College of Music in organ performance with honours and graduated with a first class honours in July 1997. He then toured the USA and Europe whilst serving as Acting Assistant Organist with the mixed choir of St Mary’s Episcopal Cathedral in Edinburgh.

Organist & Director of the Girls’ Choir

David Leigh is the Assistant Organist and Director of the Cathedral Girl Choristers at Saint Patrick’s Cathedral Dublin. He also pursues a busy freelance career as conductor, orchestral keyboard player and organist, and is musical director of chamber choir The Gaudete Singers and of the University of Dublin Choral Society, and chorusmaster of the Culwick Choral Society. Freelance work includes regular appearances in a wide ranging repertoire with the RTE Concert Orchestra and frequent work with other major Irish performing groups.