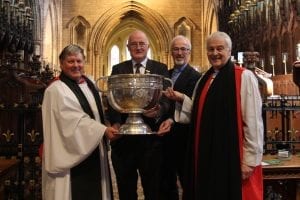 As the National Cathedral of the Church of Ireland, we were delighted to host the GAA to a special service celebrated inclusivity on May 26th. The ecumenical choral evensong featured contributions from a variety of figures from the GAA and Irish community and church life. The service acknowledged the rich tapestry of cultures and creeds that since 1884 continue to contribute to the enhancement of Gaelic games, culture, and life on Ireland and beyond. Persons of all faith and none attended this ground breaking event. Founded in 1884, the GAA encouraged the preservation and renewal of the games of Gaelic Ireland. It was part of the cultural nationalist movement and consolidated a sense of parish and county identity across the country. The Very Revd Dr William Morton said: “We are very pleased to welcome the GAA to this special service. The historic connection between the GAA and the Church of Ireland broke new ground in times past; it’s vital to continue to stand together for inclusivity and welcome in an increasingly diverse world”. 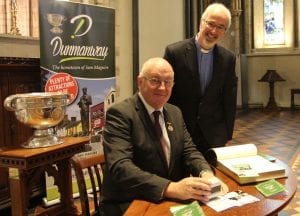 Rev Cliff Jeffers said: ‘In life Sam was Protestant by creed and nationalist by conviction and this project encourages unity and reconciliation among the people and the community from all traditions in his hometown.’ Sam Maguire was a parishioner of St. Mary’s Church of Ireland, Dunmanway. He rose to prominence in the GAA as chairperson of the London County Board following a successful playing career. (Coincidentally, Vice-Chairman of the London County Board was Liam MacCarthy who gave his name to the All-Ireland Senior Hurling Championship Cup.) The famous All Ireland football championship cup was presented to the GAA in his honour a year after his death in 1927. In 2017, the local parish and community, with the support of a grant from the GAA, restored the six original bells in the church tower while adding two new ones inscribed with Sam Maguire’s name and dates (1877-1927).

Following the exumenical Evensong Service a reception was held in the Lady Chapel launching the Sam Maguire Passport. The passport challenges the holder to follow in Sam’s steps by visiting the different locations in Dunmanway he frequented, including his home and school.

Many thanks to Lynn Glanville, the Diocesan Communications Officer Dublin & Glendalough for the wonderful images of this groundbreaking service.