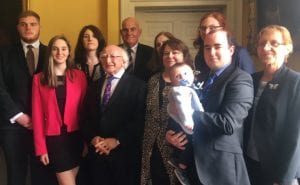 The family of the late The Very Revd Victor Griffin, with President Michael D Higgins.

A memorial service for the former Dean of St Patrick’s Cathedral, Dublin, the Very Revd Victor Griffin, took place on Sunday, May 14, at 15.15 in the Cathedral. The service was attended by President Michael D Higgins and the current Dean, the Very Revd William Morton, presided. The Archdeacon of Dublin, the Ven David Pierpoint, was the preacher. An excerpt of his sermon follows.

“Saint Patrick’s, this National Cathedral, and its environs meant so much to Victor.  In 1972, he launched the major appeal for the restoration of the Cathedral and not only reached the target set, but exceeded this by almost £100,000.  Around the same time, he set about negotiating with the Department of Education (as it then was) for new school buildings for the choir and grammar schools.  The provision of pre-fabricated units saved the schools from closing altogether and the present development on the school site is the fulfillment of what Victor began in 1973.  Both he and Daphne, almost single-handedly saved the deanery in Kevin Street from being demolished as a potentially dangerous building and they worked tirelessly to have this famous Dublin landmark restored and protected.  When the government of the day decided to widen St Patrick’s Street, leading to Christ Church Cathedral, Victor strenuously objected and with the help of so many friends in politics and the local community as well as one Charles J Haughey (with whom Victor became great friends as well as respected adversaries), the project was amended to allow for the widening of the public pathway around the west end of the cathedral and the neighbouring park.   Everything in this magnificent building enables all people, worshipers, pilgrims and tourists alike to find God.  That is something Victor instilled in me as a Chorister, Dean’s Verger, Choir Man, Minor Canon and friend.  He has taught me that wherever the worship of Almighty God is conducted, one cannot but be drawn to meditate and in time to find God present and not least here in this place.  I think it was a subsequent Dean, Maurice Stewart who said,  “This cathedral is not only a setting for worship, it is itself, an act of worship. From the smallest detail to the strong pillars and lofty arches, all proclaim the majesty of God.”  Victor’s love for this place is legendary and, as with all legends, there is truth in what is told of his devotion to Saint Patrick’s, and not without some humour either.”

Because of a special service on Friday 7 October, the Cathedral will be closed for visiting from 10.00 to 13.00.

We apologize for any inconvenience caused.