Home / News / Roof Appeal / The First Slate is On!

The First Slate is On!

Last week the Dean of Saint Patrick’s Cathedral, The Very Revd Dr William Morton, was on hand to lay the first new slate on the nave roof, a major milestone in the completion of the largest restoration project to the Cathedral in 150 years.

The roof replacement project has been underway since the beginning of 2020, but has just resumed after a delay of several weeks while the country was in lockdown. Clancy Construction, which is overseeing the project, is ensuring that the strictest health and safety regulations are adhered to onsite.

Most of the slates on the roof had been in place since the 19th Century, when Sir Benjamin Lee Guinness funded the last major restoration of the Cathedral. In the intervening 150 years, time and the weather had taken their toll on the slates.

The new slates, about 12,000 in total, are manufactured at the same quarry as those original slates. Once the re-slating has been completed, the monarflex cover protecting the roof will be removed, giving people the first view of the new roof.

Alongside this re-slating, other essential work continues including scaffold works, the removal of the North Transept Clerestory windows, and the installation of new timber walkways through the attic spaces.

To date, approximately two-thirds of the 9.2 milion euro project cost has been successfully fundraised by the Cathedral, including nearly 30,000 through the Sponsor-A-Slate programme. Those wishing to become involved can visit www.stpatrickscathedral.ie/support-us. 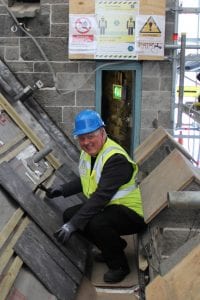 We are open for visitors on Sunday 5 June! But wish to advise our visitors that, due to the VHI Womens' Mini Marathon, some temporary road closure will be in place today from 06.00 to 20.00. While our direct location will not be closed off, the measures in place may affect your journey to visit us.

We look forward to welcoming you on your visit today and wish everyone taking part in VHI Womens' Mini Marathon the very best of luck!